Carolyn Charman FICB (“Cally”) was very honoured to have been awarded the ICB Global LUCA Award for “Charity Bookkeeper of the Year 2015” by HRH Prince Michael of Kent GCVO at a prestigious awards ceremony held in the Princess Anne Theatre at BAFTA last Wednesday, 9th December 2015. 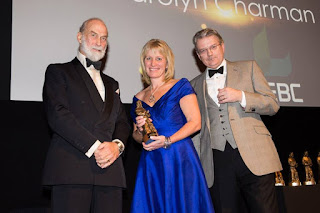 “I have been working in a totally voluntary capacity for Guildford Town Centre Chaplaincy (GTCC) as the Honorary Treasurer and Secretary since 2013 and my role is extensive and extremely varied, ranging from the management of all the daily bookkeeping and accounting records, setting and managing the annual budget, administering the payroll and HR, overseeing compliance and statutory obligations to heading up fundraising initiatives, IT procurement and preparing detailed reports and presentations for the Board.   I enjoy the role very much although it has grown considerably since my first involvement and has now become the focal part of my working life alongside a few other key clients. GTCC is perhaps most well-known for the delivery of its Street Angels project within Guildford and is now one of the leading charities nationally who manage similar schemes – indeed we have just been awarded the highly prestigious Queens Award for Voluntary Service in recognition of the positive contribution we have made in the community.  I am also proud to be one of our 85-strong team of Street Angels, all of whom give their time selflessly and voluntarily.

My previous role as a Finance Director for a large sports marketing company earning a significant salary contrasts greatly with my current role at GTCC where I am unpaid and yet bizarrely I have found greater fulfilment and motivation in providing my services to the voluntary sector.  Success as a bookkeeper is clearly not just defined by a high salary or a practice’s turnover or profit but also by the satisfaction of the employer and/or clients and the opportunity to enhance their objectives.  It’s the quality of the services provided and the “value-addeds” that a good bookkeeper can bring to the table.

I have always been passionate about the quality and professionalism of bookkeepers in business and commerce but the “unsung heroes” within the voluntary sector now deserve equal recognition.  I feel great pride to have been given this award but there are many charities, small organisations and social enterprises whose mainstay is their treasurer or bookkeeper who not only “keeps the books” but often becomes involved in many other aspects, working tirelessly within their organisation without any financial reward or public acknowledgement.  A good bookkeeper can transform the way an organisation thinks!

In today’s society with ever-increasing government cutbacks and all the diverse challenges that life throws at us, the need for charity intervention, support groups and humanitarian campaigns is now more important than ever.  These organisations rely on donations and contributions from the public and good stewardship of these financial resources is vital in delivering their services and support.  Working capital can be optimised and put to much better use with an enhanced understanding of financial position, the preparation of analytical reports to prioritise and plan, the active management of reserves and good communication both internally and externally.  Often there are also greater restrictions, compliance and other obligations placed on charities which highlights an even greater need for strong financial input and management.  Sadly, within the voluntary sector this capability is often absent or inadequate due to the lack of knowledge and understanding of how a good bookkeeper can transform the financial management and administration of an organisation and subsequently improve its financial stability, focus on key services and plan for growth and longevity.

I am very proud to have been recognised by ICB Global, a professional Institute who represents bookkeepers in over 110 countries and has just announced its own charitable initiative to raise £1M to provide training and support in underdeveloped countries in a bid to unite communities, create opportunities and relieve poverty.  This will involve not just raising cash but also providing free courses and certification, training trainers and a range of other supportive efforts.” 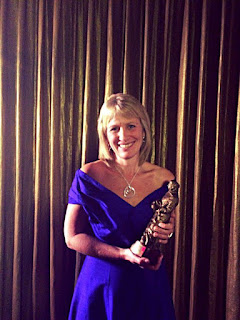 I would like to dedicate my LUCA Award for “Charity Bookkeeper of the Year 2015” to everyone involved in charity work to help others, with special mention to all the Street Angels across the UK but especially my fellow Street Angels in Guildford.  You’re the best!

I would also like to encourage everyone to consider what they can give in 2016 – just one hour of your time can make a huge difference to someone else!

Let us help you review your business, define your goals, live life to the full and make a big difference!